Kyiv Metro is a well-developed system with three lines (red, green and blue) and 52 stations. We love each and every one for their convenience, but most of them are also examples of great design. Blending in with the historical center architecture or modern and spacious. Inspired by their names or by the surroundings. Skilfully decorated with columns, lighting, wall pieces, art and mosaics. And when you consider all the challenges architects faced to create this massive underground structures, it becomes even more impressive!

In this article we’ll be featuring 10 most beautiful stations in Kyiv. Get underground and enjoy the ride! 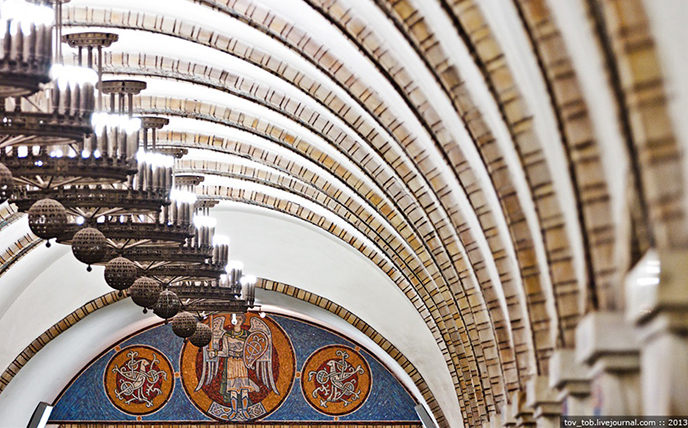 Opened in 1989 it became the 29th station in Kyiv, but one of the most amazing ones. Its depth is 96.5 m or about 317 ft. The name means "Golden Gates" - this station is located near the historic monument, ancient gates of Kyiv. There is something of an old church architecture in its pillars, arches and massive bronze chandeliers holding candle-like bulbs. 80 large mosaics on the walls and ceilings depict various Grand Princes of Kievan Rus', saints, significant personalities and important architectural monuments of the period. The station is also full of symbols from an old Slavic mythology and gorgeous traditional motives. This pearl always hits all the World`s Most Beautiful Subway Stations lists. 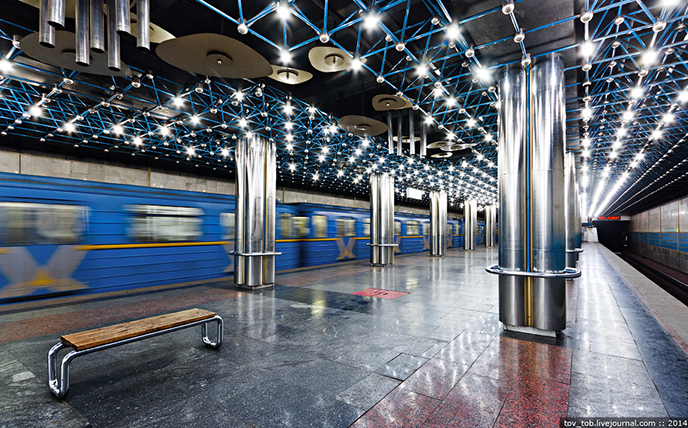 Slavutych is an old name of the Dnieper river. The station itself started working in 1992, but it stands out from all the predecessors with its fantastic design. The idea wasn`t the space odyssey, believe it or not. Blue color and cool stainless steel elements symbolize the river. And the ceiling - stars over its waters. The overall theme was "The Dnieper night". Well, Slavutych interiors are quite unique and memorable, let`s give them that. 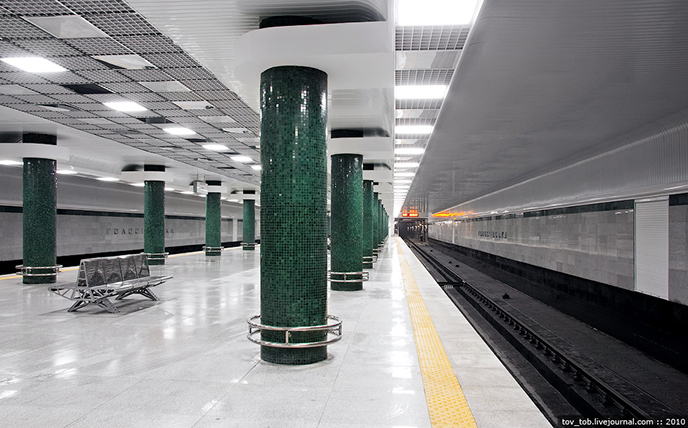 Holosiivo is the name of the area where this stylish Kyiv metro station was built. It opened the doors in 2010, making it one of the newer ones. We like Holosiivska for its simple and tasteful color scheme, clean lines and freshness. Mosaic pillars look like precious malachites in an elegant black and white jewelry box. 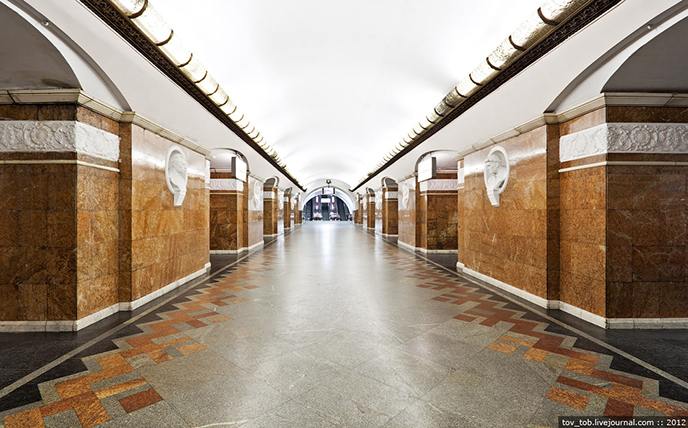 Socialist classicism style station has greeted its first passengers in 1960 and is quite deep - 87 m or 285 ft. Taras Shevchenko National University of Kyiv situated nearby gave it the name. The white marble friezes on the red marbled pylons are decorated with ukrainian floral patterns and the granite floor has a traditional ornamental layout. Marble busts of famous people include ukrainian philosopher Grigory Skovoroda and our beloved poet Taras Hryhorovych Shevchenko. 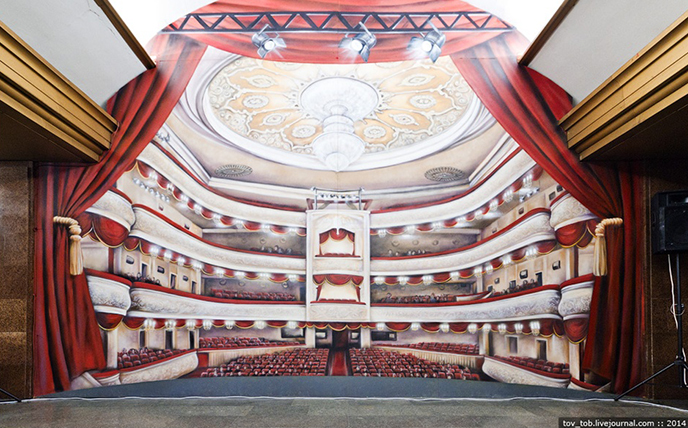 The station that lies 70 m (230 ft) below the ground was named after the Kyiv Opera Theatre. But the design was a little different. From its opening in 1987 until 2014 Lenin bas-relief was overlooking the crowds. Now it is coverd by a 3D painting of our Opera - a present from an art studio. But the ceilings and wall sconces on this station were always theatre-like.

One of the stations in the heart of the city was opened in 1960. Maybe the location on the main street of Kyiv, Khreshchatyk, called for classic design, but its pillars featuring ceramic Ukrainian ornaments and bronze grills bring the  warm feeling of home. No one even remembers that columns are also covered in marble. The decor with sunflowers is so bright, lively and colorful. Warm like a fireplace. Each tile was made by hand and is completely unique. 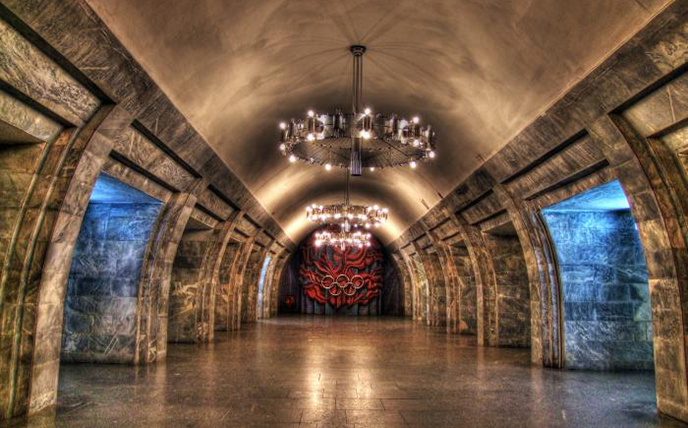 A station near the biggest stadium in Kyiv was opened in 1981. Well-known 5 rings at the end of the station commemorate the 1980 Summer Olympics. The authors of the project intended to cover the walls with white marble, but it went to Ukrainian House. Now we`re used to it being grey and a little mysterious-looking. Sport theme is all over: the chandeliers look like bicycle wheels. 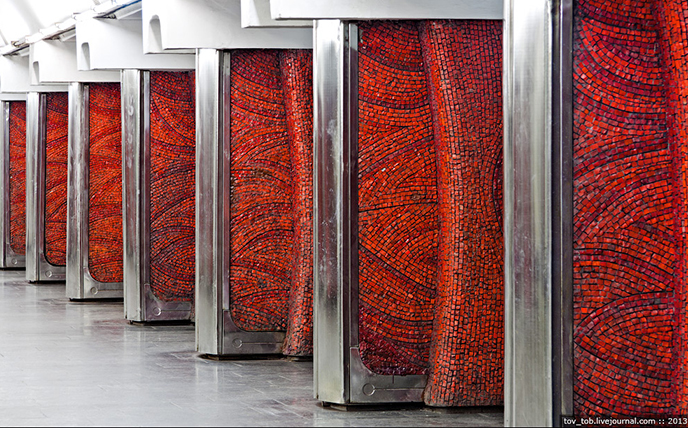 Palats "Ukrayina" was unveiled in 1984 and is named after the biggest concert hall of Kyiv -  Palace Ukraine. The line might be blue, but the stunning mosaics are very much red. Once they symbolized the flames of revolution. The end face of each pillar was covered with shiny stainless steel. And the huge ring-shaped chandeliers were brought from another cultural center - "Ukrainian House".

Although the station was opened in 1984, it got its present name only in 1990 - after the small river Lybid. Sophisticated brass chandeliers, unique double pillars and arches make this station quite graceful. Track walls are decorated with pink marble from Cuba. 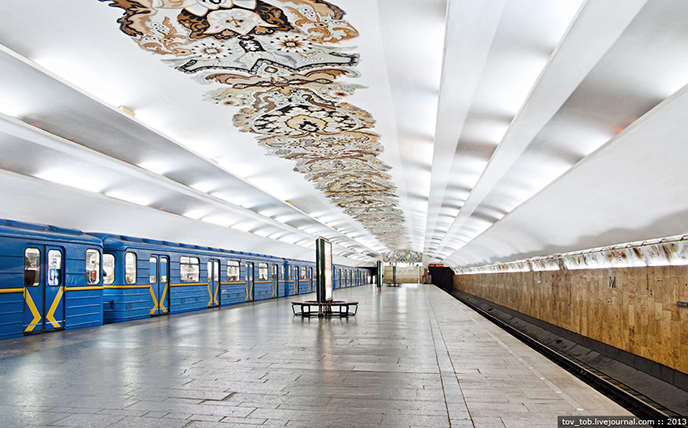 The station was opened to public in 1982. Minsk is a "friendship town" of Kyiv, and the name of the station commemorates that as well as the art inspired by traditional belarusian culture. What we like about its design. is that the pattern doesn`t repeat itself - it`s constantly changing and evolving.